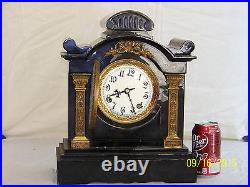 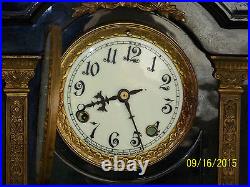 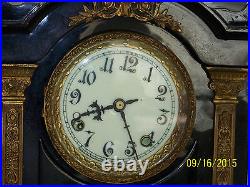 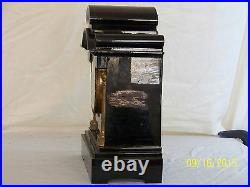 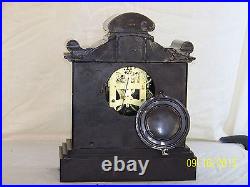 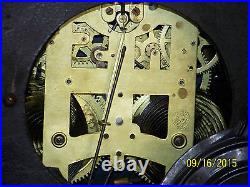 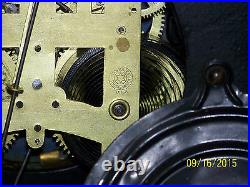 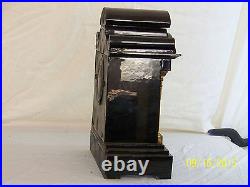 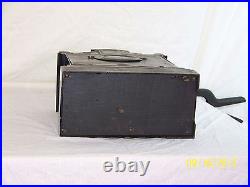 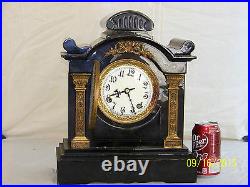 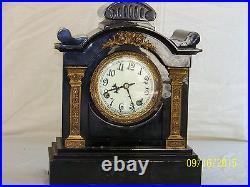 Antique New Haven Cast Iron Case Mantle Clock. Inside on a cast iron plate is the number #1693. This is a "Beautiful" Clock and is Complete except for a key! This is a heavy item. The front face and bezel is off center needs to be adjusted-This is something you can do!

Other then this very minor flaw this item is in EXCELLENT CONDITION! MEASURES: 14 3/4" x 12" x 6 1/4. HISTORY: Founded in 1853, the New Haven Clock Company was the first to mass-produce brass clock movements in America. The company was formed to supply these movements to the Jerome Manufacturing Company, then the largest clockmaker in the world. In England, Jerome & Co.

Among the Jerome clocks that New Haven produced for export was an 1860 mantel clock called the Duchess. It had a veneer case, an angled top, Roman-numeral letters on its dial, and a glass window to reveal the swinging pendulum inside. Double-dial calendar clocks, for walls and shelves, were also popular. Some had light oak cases, some were made of rich walnut, and still others were produced by New Haven for the National Calendar Clock Company.

One of these has three finials on top and is especially sought by collectors of antique New Haven clocks thanks to the word "Fashion" emblazoned between the two dials (Fashion was a popular magazine of the day; Seth Thomas and others also made these so-called Fashion clocks). Perhaps the most collectible of the late 19th-century New Haven clocks is the Ignatz, or flying pendulum shelf clock, from 1884. Instead of a lever, anchor, recoil, or other traditional type of escapement, the flying pendulum had a ball-and-string "tetherball" escapement that whipped from side to side on the top of the clock's case. New Haven produced them as Jerome & Co.

Clocks, but only for about a year. New Haven made hundreds of other models, from banjo clocks to regulators to grandfathers, with names like Anglo, English, Glenor, and Occidental. In 1880, they even added a line of non-jeweled pocket watches. But mismanagement plagued the otherwise successful company. After flirting with bankruptcy in 1894, New Haven pulled itself together in 1902 when Walter C. Camp, who was then known as the "father of American football, " took the company's reigns, modernized to reduce costs, and, in 1915, added wristwatches to the company's offerings. The changes Camp instituted were enough to keep the company profitable through the Depression, but after World War II, the company struggled through disruption caused by a takeover and poor sales, finally folding operations in 1960, a little more than 100 years after it had been founded. ----THIS ARTICLE AND BIOGRAPHY WAS WRITTEN IN THE COLLECTORS WEEKLY!

This item is in the category "Collectibles\Decorative Collectibles\Clocks\Desk, Mantel & Shelf Clocks". The seller is "1kul57" and is located in this country: US.

This item can be shipped worldwide.