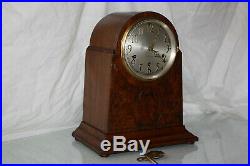 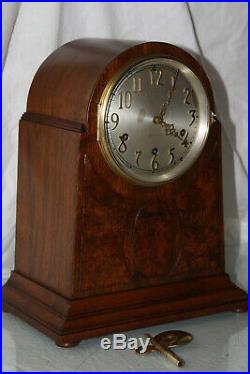 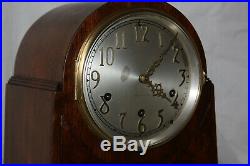 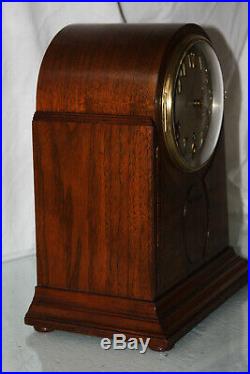 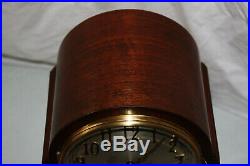 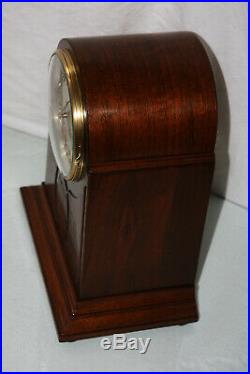 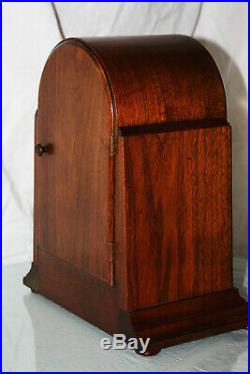 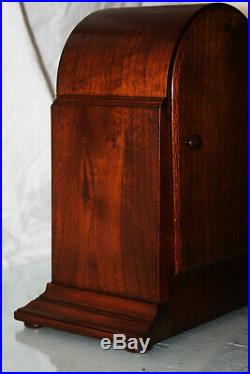 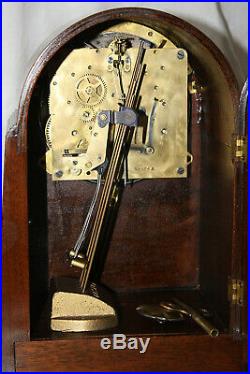 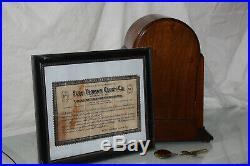 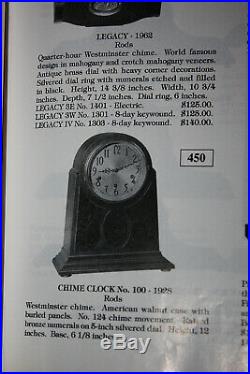 WESTMINSTER CHIME FAMILY OF SETH THOMAS CLOCKS No. 100 All American Walnut VENEER WOOD Case With Burbled Panels. Clock chimes the Hours counting them , every Quarter time, You also can see on picture how the whole clock is clean after cleaning, including the mechanism. Clock has nice Tick-Tack sound of work.

I will include instruction how to set up the Clock mechanism. Movement is marked with ST-(SETH THOMAS), Clock measures 10" from leg to leg x 6 1/4" deep x 12 1/4 height to the top. This is Huge Clock still has Original Silvered Face with Beveled Glass(see pictures) 5 1/2 in diameter with Beautiful Brass ring. Every piece of this clock is original.

All clock is very unique hardly to find for sale, usually is keep it by collectioners of Seth Thomas clocks. Price is height by You can also make an offer, Please see all clock is use zoom , this particular clock is in Excellent condition for this Age there is some damage on the veners but nothing visiblle from distance. I will include a copy of ST "Guarantee Certificate"(see picture) Absolutely for FREE This particular clock is just token of it's beauty and originality in past. People love to see something old, which comes with the style and elegance of the beginning 20th century, AMAZING. Please feel free to contact me with any questions or to request further photos!

Pendulum and key are included with the clock. The clock is running perfect!!!!!!! The clock has original surface, just some touch up was done. Clock is original was polished and clean from dirt to original finish. For over 90 Years old,,,, PLEASE SEE ALL PICTURES FOR ALL DETAILS ---ANY QUESTION ABOUT THE CLOCK PLEASE ALWAYS be FREE TO SEND THE MESSAGE THRU E-B bay page- ----PLEASE SEE MY OTHERS CLOCKS FOR SALE!!!!

If any questions just make a message and find even more great items ,,,, thanks Seth Thomas Clock Company History Plymouth Hollow, Connecticut (After 1865) Thomaston, Connecticut Seth Thomas Seth Thomas was born in Wolcott, Connecticut in 1785, the fifth of seven children of Scottish immigrant, James Thomas, a cooper, and his wife Maria Ward. Connecticut, incidentally, was an important and expanding hub in the American clock making trade. Seth Thomas Childhood Home, 36 Peterson Ln He was born in this house and lived there until about 1810 Seth had a natural ability for carpentry and he probably obtained his knowledge and interest in mill property and manufacturing from this. He had limited formal education and left school at an early age to become an apprentice carpenter and joiner to Daniel Tuttle, of Plymouth.

Subsequently, he became a skilled woodworker and built houses and barns in the nearby towns around Farmingbury/Wolcott (incorporated 1796). In the early 1800s, Seth attempted to set up a clock-making industry in Wolcott.

He made his first clock in his family's house. The woods around the house were filled with mountain laurel trees; many Wolcott men worked cutting the trees and sawing them into thin slices, which, when seasoned, were used for the wooden wheels of the clocks. The women of the town spun flax (cotton) into cords and these were used to hold the clock weights. As a result, the town of Wolcott profited to some extent from the Thomas enterprise, the short time it was located in Wolcott.

In 1807, Seth moved to Plymouth. There he joined Eli Terry and Silas Hoadley in a business of making clocks at a wholesale rate. Seth mainly worked on fitting the wheels and different clock parts together.

From 1807 until 1810, they made 4000 clocks of the "hang-up" or "wag-on-the wall" type. These clocks did not have cases, but buyers who wanted cases for their clocks hired carpenters to build what they called "grandfather cases" for them. The land included a clock factory and was conveniently located near Eli Terry's new shop where was the non-compete agreement? Thomas continued Clarks wooden movement tall clock production, and about 1817 began making the wooden movement shelf clock. These were cased in pillar and scroll cases until 1830, when the bronze looking glass and other styles became popular.

In 1842, brass movements were introduced, and first cased in the popular O. Case (which was made until 1913). Wood movements were phased out in 1845. Seth's first wife was Philinda Tuttle; they married in the early 1800s and had a daughter, Philinda. His second wife was Laura A.

They had six children Seth, Martha, Amanda, Edward, Elizabeth, and Aaron. And Aaron went into the clock business with their father, subsequently enlarging the clock factory and developing it into a worldwide business. After Thomas death in 1859, the town of Plymouth CT was renamed "Thomaston" in his honor. At that time, Aaron became President and began to add new products. Huntington and Harvey Platts of Ithaca, New York and added three models to their line that year.

On February 15, 1876 Randall T. A Thomas relative and workman in the factory, received a patent on an improved mechanism. This was put into production and utilized on all later perpetual calendar clocks until the last model was dropped in 1917. Movement Dept - Thomaston CT Regulator clocks were introduced in 1860.

Spring driven clocks were introduced ca. Perpetual calendar clocks were made from ca. Some of the most popular later types include walnut kitchen clocks, made from 18841909; marble clocks, 1887ca. 1895; black (Adamantine finish) wood mantel clocks, ca.

Many Seth Thomas clocks from 1881 to 1918 have a date code stamped in ink on the case back or bottom. Usually, the year is done in reverse, followed by a letter AL representing the month.

For example, April 1897 would appear as 7981 D. On January 1, 1931, the firm became a subsidiary of General Time Instruments Corporation and soon passed from family control. In 1955, a flood badly damaged the Seth Thomas factory.

They phased out movement manufacturing and began importing many movements from Germany. Hermle, in the Black forest of Germany, has made many movements for Seth Thomas clocks. It was reported in 1988 that the firm was all but dissolved. In June 2001 General Time announced that it was closing its entire operation. The Colibri Group acquired Seth Thomas.

In January, 2009, The Colibri Group unexpectedly shut its doors, laying off its 280 employees and preparing to sell all remaining jewelry, gold and silver to pay creditors. The following message appeared on the Colibri website: February 16, 2009: The Colibri Group is currently in receivership and is not accepting any orders at this time. We will update this message as new information becomes available. We are sorry for the inconvenience.

Thank you for your patience. Seth Thomas Dating Seth Thomas Clocks Some early Seth Thomas clocks can be dated by the address of the printer (Elihu Geer) who printed the labels found inside. If your label is still intact, the printers name and address can be found in small print at the bottom of the label. PLEASE VISIT MY OTHER AUCTIONS. Please note that most of my items are antique/ vintage items and show normal signs of wear and use, such as small nicks and dings, etc.

Please check the pictures as they say much more than words. I dont usually list every little nick or ding; the pictures show a much better description. Please do a level to the clock to keeping and running well. Customer service is very important to me.

If you have any questions at any point during the purchasing process, please dont hesitate to ask or contact me. Feedback I Strive for 5!! Please give me a chance to resolve any issues. I I want all my customers to be satisfied when they receive their package!!