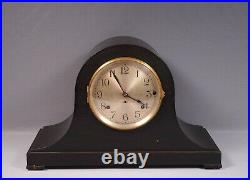 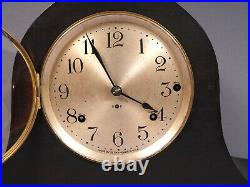 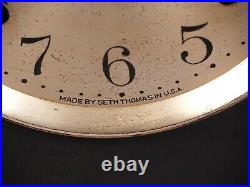 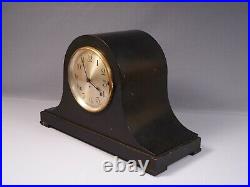 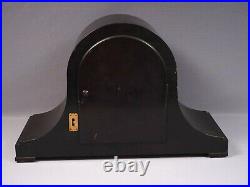 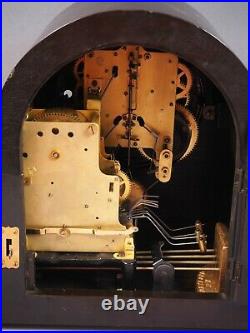 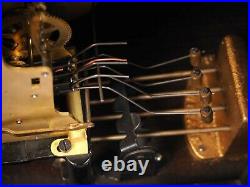 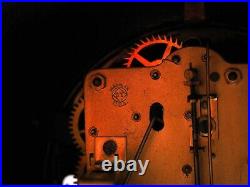 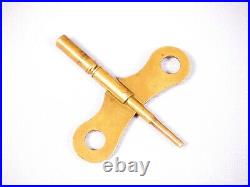 This is a beautiful vintage Seth Thomas Westminster Chime 8-Day Mantel/Shelf Clock. It is Tambour Shape clock. I think it is Model 59. It has a silver tone dial. The face is marked "Made by Seth Thomas in USA". On the back of the clock works is'Made in USA" "ST" mark and "119A. There is silent/chime lever on the back. This is a lovely case clock in excellent vintage condition. It winds and keeps time nicely, and chimes beautifully.

The wood case is in excellent vintage condition, no chips, no cracks, no damage. It has wonderful Westminster Chimes that sound melodiously with different chimes sounding on the 1/4 hour. And on the hour it chimes a full set, then it also strikes the hour, denoting the time. This measures 14 3/4" tall by 10 1/4" wide, by 7 1/2deep from front to back.

A must for the clock collector. And a wonderful display piece. Would have a place in any collection. Antique Seth Thomas clocks are treasured by clock collectors and antiques lovers who value craft and sophistication. Seth Thomas, born 1785, was an amateur clockmaker who began his career in earnest when he moved to Plymouth, Connecticut.

In 1853, Thomas incorporated his business as the Seth Thomas Clock Company. Though an innovator when it came to production techniques and business, he was rather conservative when it came to the appearance of his clocks.

After his death in 1859, Thomas' sons Seth Jr. And Aaron were quick to introduce new clock styles. Today, you can see the company's late 19th-century creativity in handsome antique wall clocks, regulators, spring-driven clocks, and clocks with calendars. Seth Thomas responded to the French challenge with its own line of marble clocks (1887 to 1895) and iron clocks finished in black enamel (1892 to 1895). But the Seth Thomas response that is best known today is its Adamantine black mantel clock, which debuted in 1892.

Adamantine was a veneer developed by the Celluloid Manufacturing Company to replicate the look of wood, onyx, and, most importantly, marble. The Seth Thomas Adamantine mantel clocks were popular enough to remain in production until 1917. Another trend from the late 19th century was the practice of naming a clock after international cities.

Seth Thomas did that, too, using names like Milan, Genoa, and Naples to evoke the style of a particular clock. The company also had a City Series of clocks named after U. T Even Utica got its own clock. The City Series was produced for roughly 40 years. Antique Seth Thomas clocks were also named after presidents (Lincoln, Garfield) and royalty (Victoria).

Others were named after universities, from Cambridge to Cornell. Check out my other items. Be sure to add me to your favourites list.

This item is in the category "Collectibles\Clocks\Antique (Pre-1930)\Shelf, Mantel". The seller is "retro_saloon23" and is located in Ontario. This item can be shipped to Canada, United States, France, Australia, Mexico, United Kingdom, Germany, Japan.